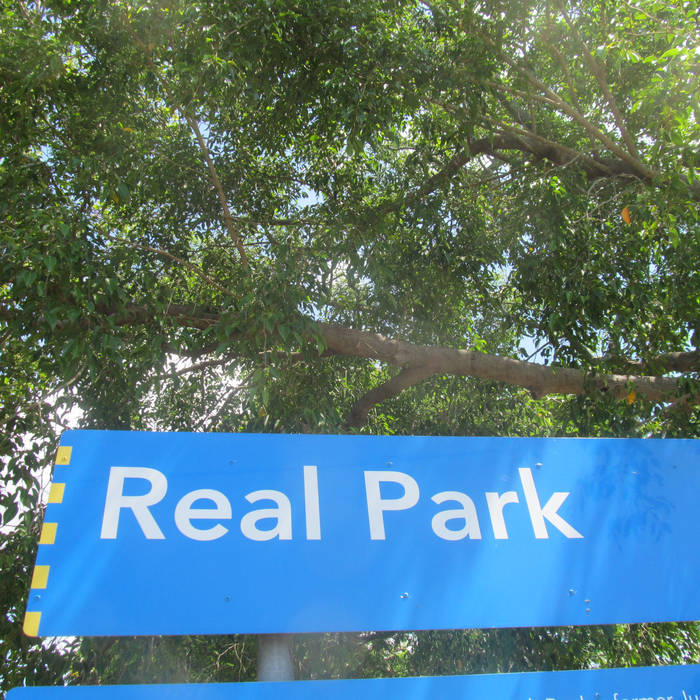 “Real Park” is a real park in East Brisbane. Bek Moore of Clag fame was keen to photograph the sign for the cover and title of an album by her band Scrabbled. (who are on bandcamp.) Bek even almost commandeered the original BCC sign! Unfortunate to relate, Bek died in 2016, before she could put out that Scrabbled album. To thank Bek for her life of reinvigorating dead cities, and also because it kicks arse, we hereby steal her cover/title.

We recognise the traditional caretaker ethic as able to create an ongoing real park. Market competition is unsustainable. As long as it persists such competition is exploitative and NO FUN.

Produced, recorded and mastered by GK, except 1& 4 graciously mastered by Andy Cooke. Thanks to Shannon Jansen for the loan of an authentic Indian harmonium. Cheers to Ross Hornblower for helping, Baron von Borg and Tom Smith for the gigs. SHU from Canberra for playing with us in Brisbane. No thanks to the intimidation at the Kurilpa Park gig: we stood our ground then and we'd stand it again.

Bandcamp Daily  your guide to the world of Bandcamp